In 1918 the Somber Evangelical Lutheran Church was reorganized when the original congregation, organized in 1859, entered in to the Merger of 1917. The name of the congregation was given by Mrs. T. Torgerson. It is derived from a French word meaning”shady place”. Because of the Merger this group was without a church building.

The congregation worshiped in a temporary facility until 1929 when a church building in Latimer, Iowa (which had been given to the synod) was moved to the present location. The parish hall was constructed in 1953. A Christian Day School was operated in 1905-64. The congregation joined the ELS in 1919. The congregation currently receives pastor services together with First Shell Rock (Northwood), Immanuel (Riceville), Lake Mills, and Lime Creek (Lake Mills).

The following pastors have served the congregation since its reorganization in 1918:

CHURCH HISTORY (up to 1969)
The work of the Norwegian Synod in the area east of Lake Mills began with a divine ser­vice held at the Lars L. Loberg home in Silver Lake township on Sunday the 20th of July, 1858. The Somber congrega­tion is the descendant of the organization of this Norwegian Synod congregation in 1859. The organization effort was led by Pastor C. L. Clausen and was named Silver Lake Luther­an Congregation. The member­ship of Silver Lake Congrega­tion at the time of its organiza­tion consisted of about 40 fami­lies in Worth and Winnebago Counties, Iowa and Freeborn County, Minnesota.

The Sunday and slavery ques­tion during and following the Civil War caused a split in the Silver Lake Congregation and the minority with its Pastor, T. A. Torgerson, moved to a new location four miles south, in Bristol township, in 1869. They retained the name Silver Lake Congregation. This Synod congregation built a house of worship on the present site of Sion Lutheran Church, in 1873. This building served the con­gregation until it was destroyed by fire on December 22, 1916.

The congregation suffered another split when the majority voted to enter the merger of Lutherans in 1917, and the minority, once more, for con­science reasons, had to with­draw and move its location to its present site. After 1917, 27 voting members organized the Somber Evangelical Lutheran Church. One member, Levor Levorson, donated a large plot of land as a location for a church, school, and cemetery.

The name Somber was chosen at this time because of its loca­tion in a grove of large shade-giving oak trees. Somber is de­rived from the French word “somber” which means “to shade. ”

A residence was moved to this location among the oaks and was used as a house of wor­ship. In 1928 the Somber Congregation was given a church building that was completely furnished. This gift, given by St. Petri Danish Lutheran Con­gregation at Latimer, Iowa, was gratefully accepted and moved in sections to its present site. It was rededicated on June 30, 1929. On this joyful occasion the Rev. Christian An­derson and the Rev. N. A. Madson preached and the Rev J. B. Unseth laid the corner­stone. Inside of the corner­stone were placed Luther’s Small Catechism, Explanation of Luther’s Catechism, copies of “Luthersk Tidende” and “Lu­theran Sentinel” and a “Eulogy of Luther’s Catechism” as well as the documents of St. Petri Congregation.

In 1934 the congregation observed its 75th anniversary. The speaker for the occasion was Pastor H, M. Tjernagel. In 1959 the congregation com­memorated the 100th anniver­sary of its inception with ap­propriate festivities. 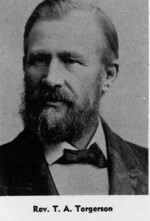 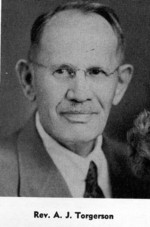 Sons of the congregation who served the church as pastors or professors are: Oscar Levorson, Levine Hagen, Stanley Holt, Le Roy Levorson and Wayne Halvorson.

In 1905 the congregation organized a Christian Day School with four pupils and met in the basement of the parsonage of Pastor Torgerson. Helene Bosheim was the first teacher, in 1909 accommodations for two classrooms were provided in the church basement and the enroll­ment that year was 54. The school continued in operation until 1965 when, after 60 years of fruitful history, it closed for lack of students.

As a result of legacies, and especially the legacy of the late Peder Nelson, a combination schoolhouse – Parish Hall was built in 1953. This was used for a Christian Day School until 1965 and is now used for the activities of the Ladies Aid Society and for other activities of the congregation.

RECENT HISTORY
The Somber Lutheran Church building was destroyed by fire early on July 4, 2000. Built-in the early 1900s at Latimer, where it served a Danish Lutheran congregation, it was moved to the Worth County site on 450th Street just west of Finch Avenue in 1929.

People of Somber Lutheran Church, a congregation started by Norwegian Lutherans in 1918, still worship with the congregation of Lime Creek Lutheran, north of Lake Mills, as they did before the fire.

“We’re using our parish hall,” said Albin Levorson, former president of the congregation. “We have a church there for half a year.” “The fire didn’t affect the membership,” Levorson said. 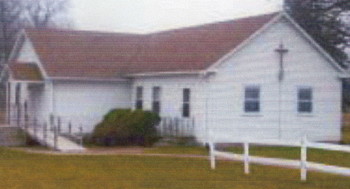 Services, women’s meetings, and confirmation classes are all held in the parish hall, he said. A vestibule and entryway were built onto that building following the fire. A movable altar and pulpit were also constructed.

“We were doing fine,” he said, but both congregations were getting smaller. There are about 35 members at Somber.

During winter, the congregations meet at Somber while in the summer months, they worship at Lime Creek, the church where their Evangelical Lutheran Synod was organized in 1918.